I have been procrastinating writing this post for about two weeks now… in fact, every time I get close to being ready with it, I discover a new graph I can add to it. However, I need to accept that it will never be perfect (I mean, seriously, what is?) and just roll with it. Also, I need to finish writing my 2019 goals, because, we’re already in 2019 and I should have some… right?!

PS: This is going to be the longest post EVER, so I’m apologising in advance. SORRY! Also, this probably should have been THREE blog posts, so come back to it when you have more time. Like… a LOT more time…

I read 91 books in 2018! I mean, it’s not what my Goodreads says because apparently I’m crap at adding all my books to it, plus I read some betas this year and they’re definitely not on there… (possible goal for 2019: Add books to Goodreads before you forget you read them) So, I guess it’s a good thing I did all those monthly tables!! ??? 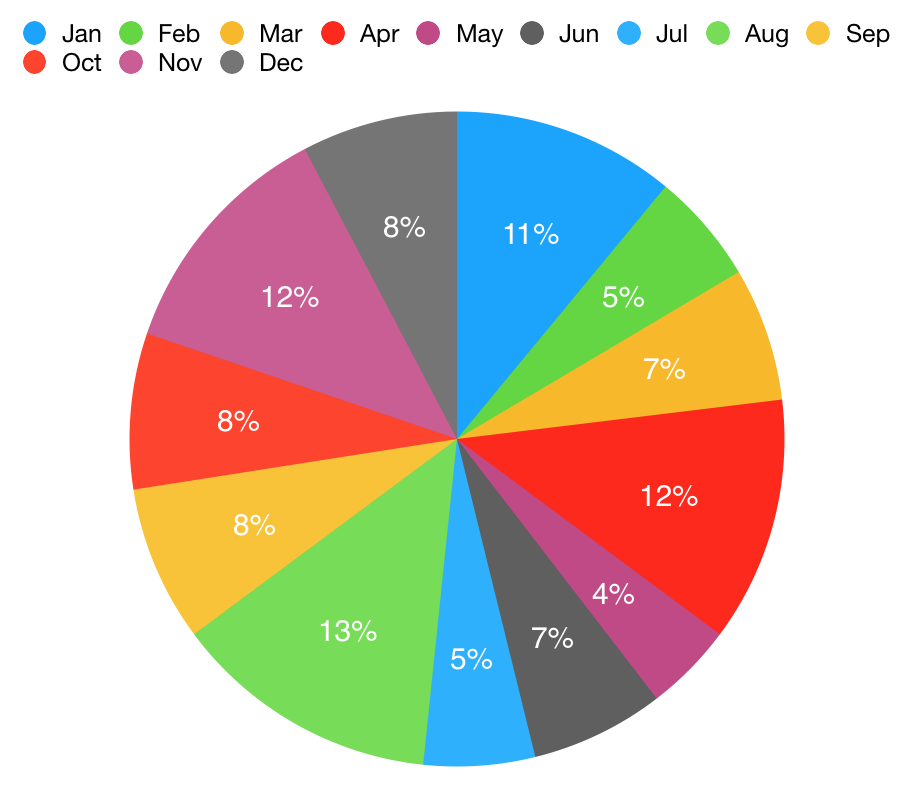 It’s kind of weird (to me) to see the percentages of books I’ve read each month. This isn’t a graph I’ve done before, but you can certainly see my three biggest reading months: January (I was on holidays), August (I did my OWLs) and November (not sure, I just had a killer month)! 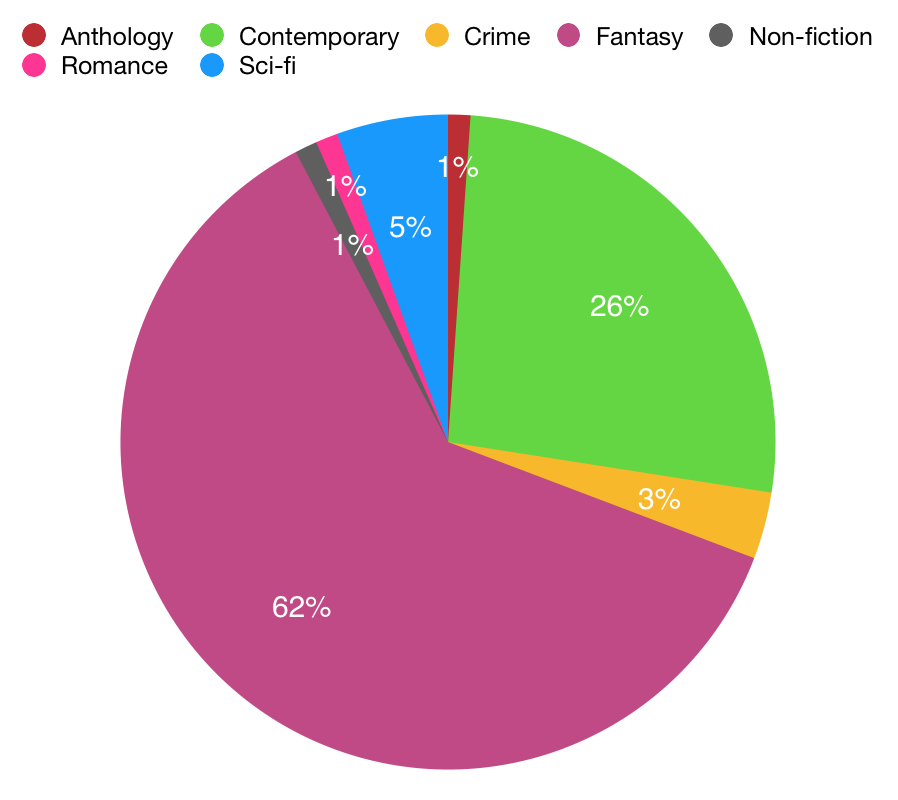 Unsurprising to, well, anyone really, I read WAAAAAY more fantasy than anything else. Originally I split the fantasy into three sub-genres:

but, there were just a lot of colours and it got kind of weird and confusing, so then I just lumped them all in together again. Anyway, fantasy was almost two thirds of everything I read in 2018 (and I don’t expect that to change for 2019). 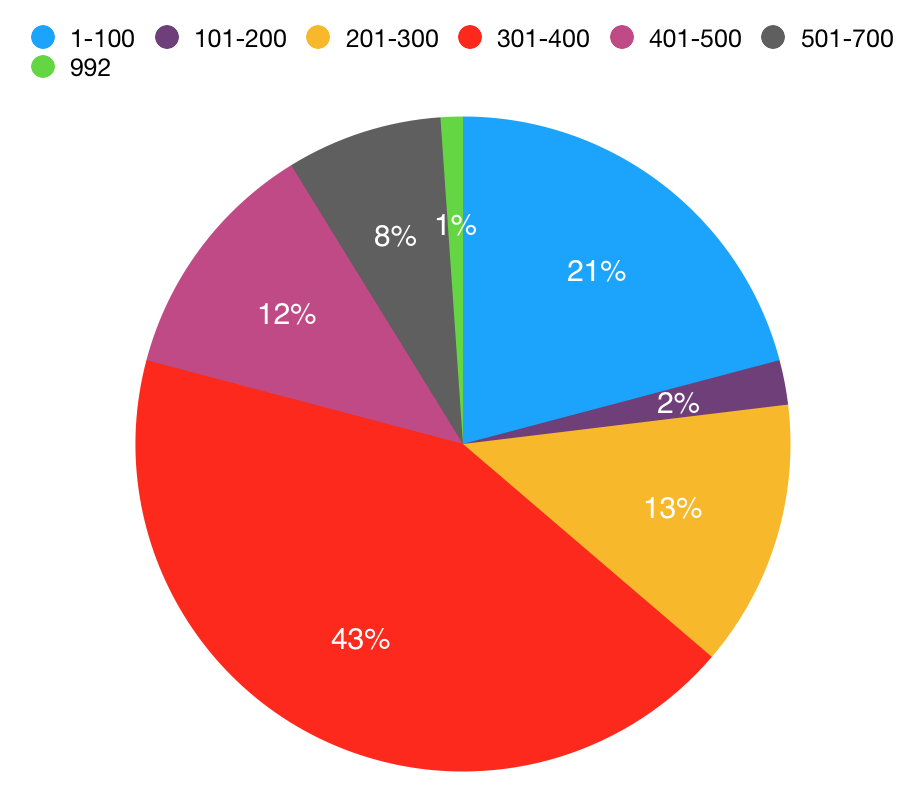 I never thought that the number of books between 1-100 pages would be so high, but I clearly forgot that I read so many comics! I mean, I read all 12 issues of Fence, so that’s 12 right there, plus there were some novellas in there as well. However, there were some giants in there too, including Kingdom of Ash all alone at the top of the chart at 992 pages! My average book length for the year was 303 pages. 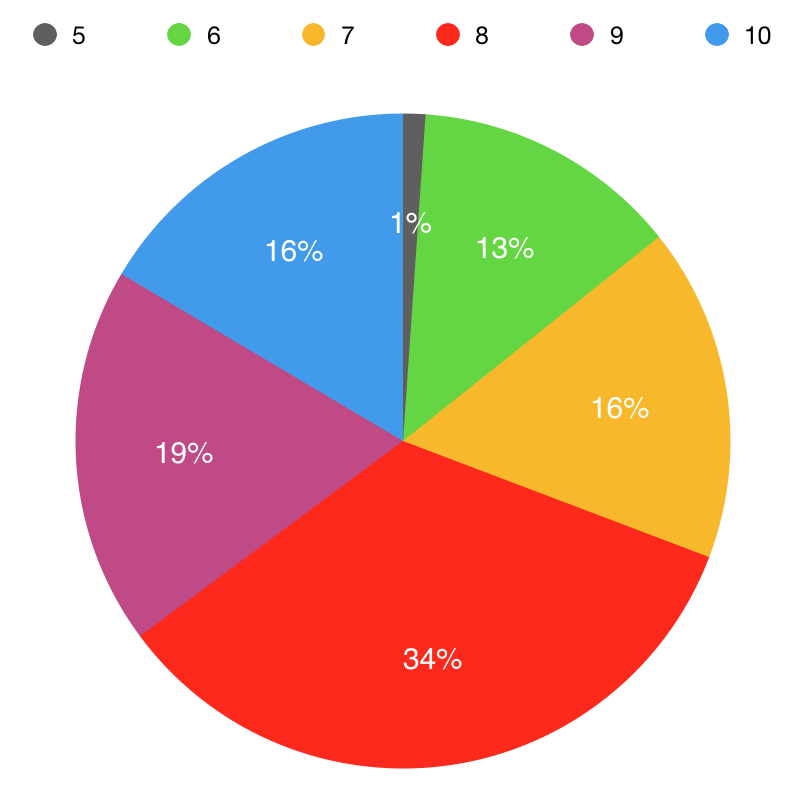 This was a pretty good year for book ratings! My average rating for the year was 8.1, and 8 was also my most common rating, so lots of great books! 2018 also marks the end of my 10 star ratings. I’m moving back to a 5 star system as I finally made myself graphics for half stars (which is the whole reason that I moved to a 10 star rating anyway). 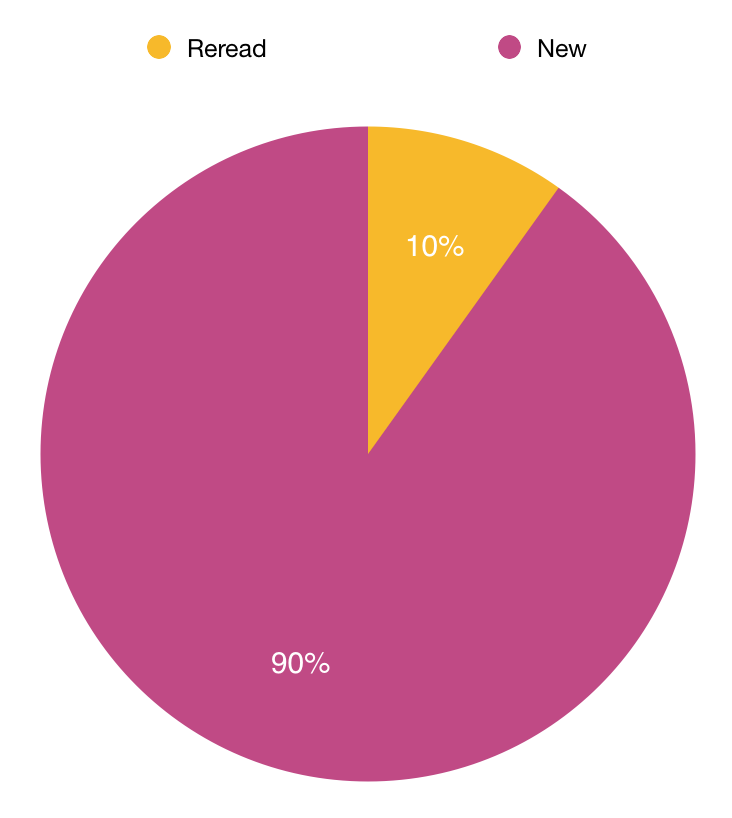 2018 was also the first time that I recorded whether I was reading a book for the first time, or if I was rereading an old favourite. I anticipate this will only increase next year as I’ll be doing the Discworld read-a-long for the entire year (so that will give me 12-13 as I still haven’t finished the Dec book…). I also plan on rereading Nevernight and Godsgrave before Darkdawn comes out in September!! 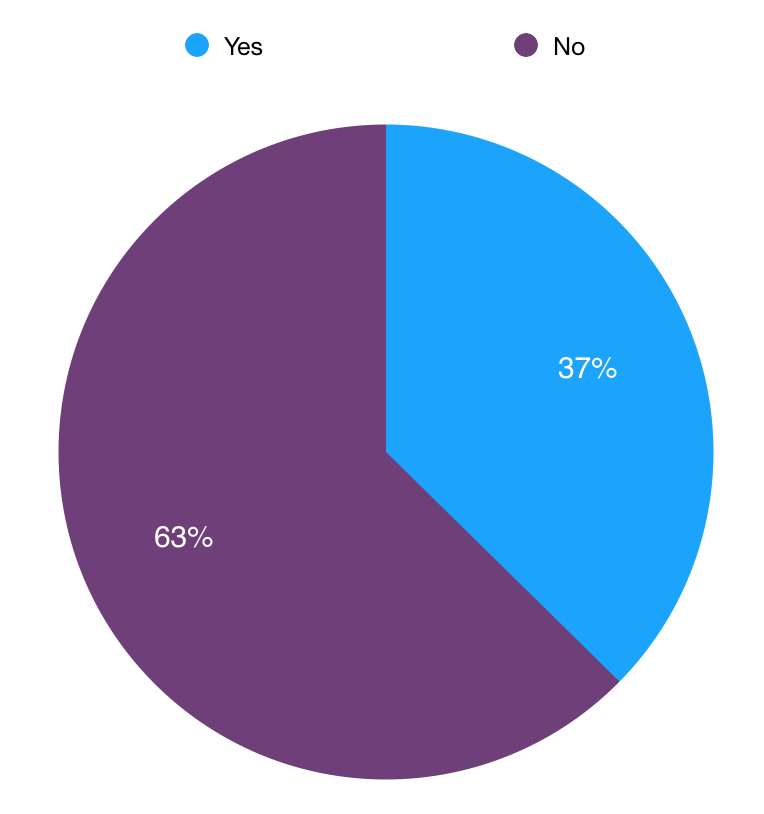 A-HAHAHAHAHAHA, I crack myself up. (Sorry…) So, this graph tells me that I only sometimes stuck to my monthly TBR list. I’m actually thinking of giving them up for the month and focusing on my book bingos and other reading challenges, but not setting a specific TBR for each month. What do you think? Should I keep on compiling a TBR (even though I am a HUGE mood reader)? 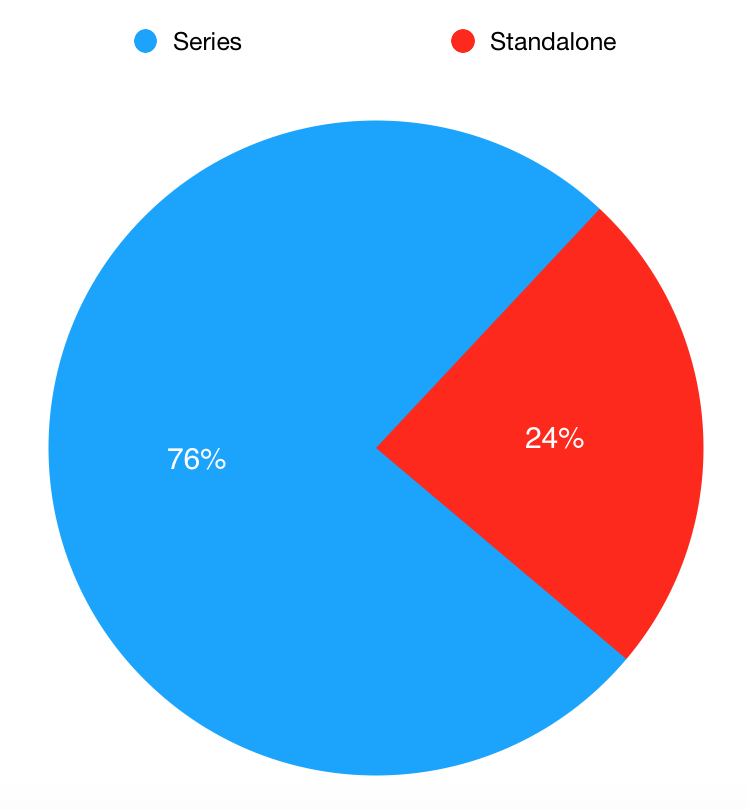 Now, the high percentage of series is entirely due to the fact that the majority of fantasy novels are a series, rather than a standalone novel. However, there have been a couple of contemporary novels that have been announced as a getting a sequel recently that I had marked as standalones before. Did you know that The Start of Me and You by Emery Lord is getting a sequel this year? How exciting! I really loved that story. 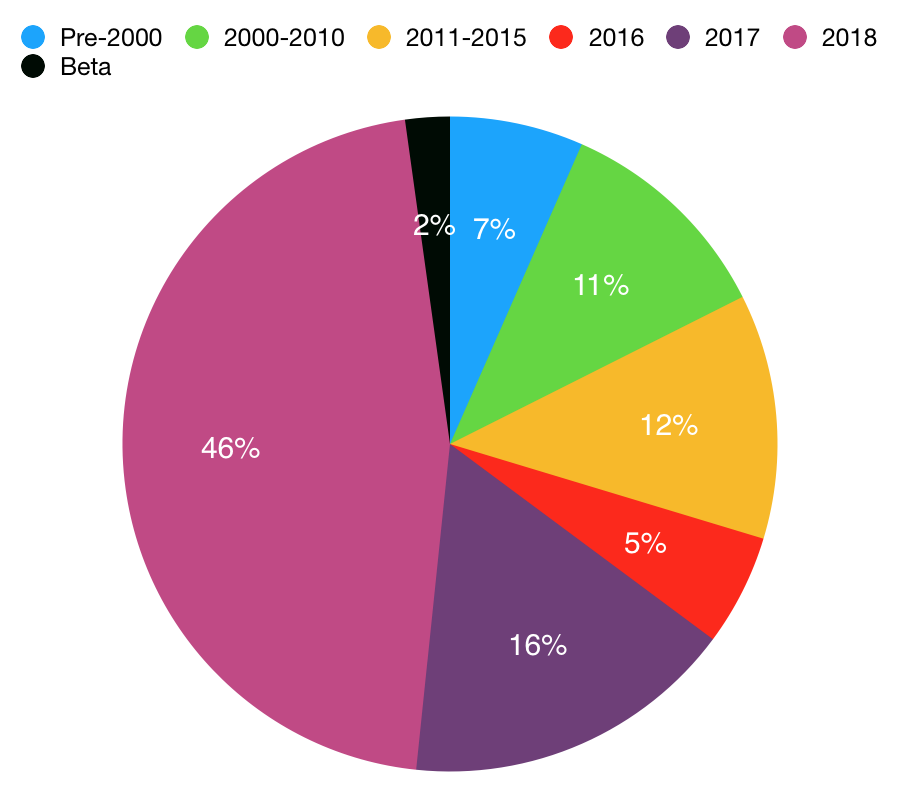 I was actually really surprised that the majority of books I read in 2018 were published in 2018. I always thought that most of the books I was reading were backlist books, but apparently not! Unfortunately most of the books I still haven’t reviewed were 2018 publications, but I promise they are coming!! I have a full blog schedule for the first 6 months of 2019 so I anticipate that they will be coming sooner rather than later! (Fingers crossed!) 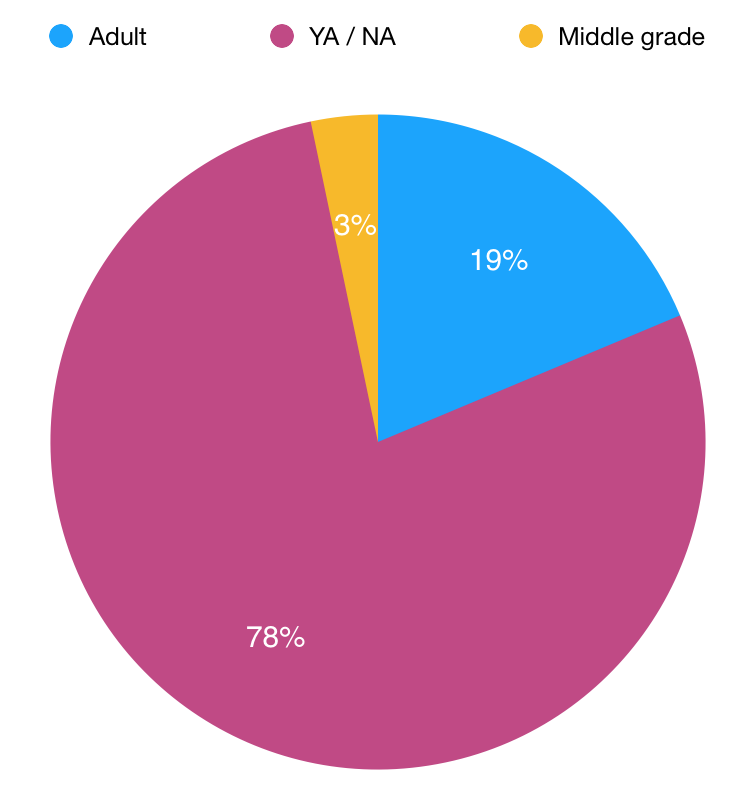 SURPRISE! I read LOTS of YA/NA books in 2018. I mean, who am I kidding? Of course this was going to be the case… I’m actually more surprised by the number of middle grade books. As in, I thought it would be lower… Although, I guess I did start the Percy Jackson series…. (finally) 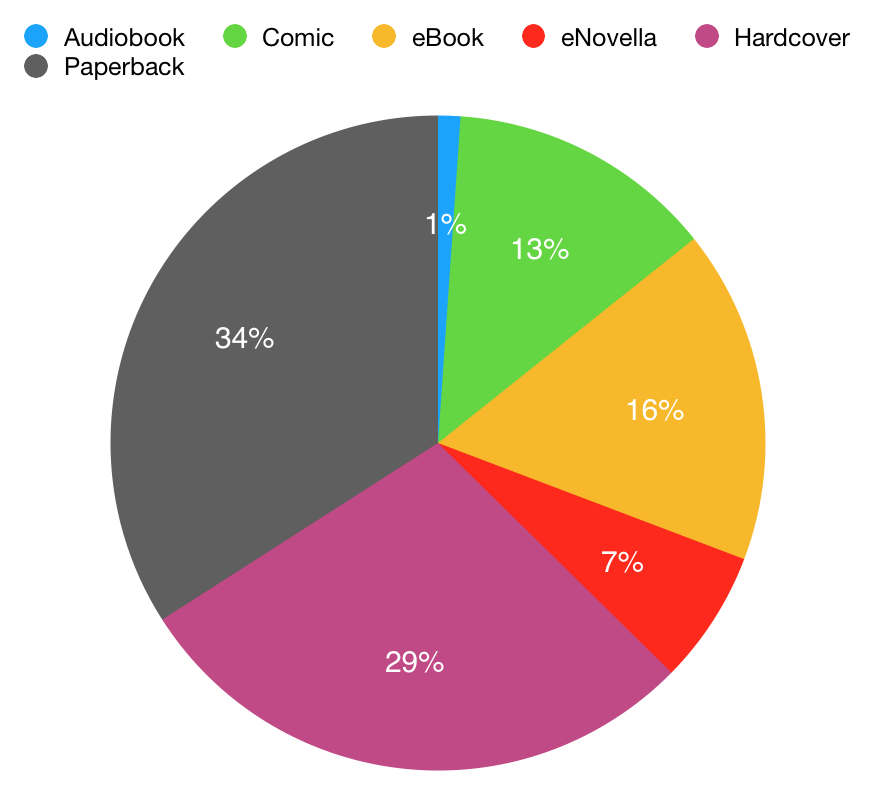 You can tell my mind is wandering the longer I write this… Only 8,649 more graphs to go!

Clearly I have a preference for physical books over electronic versions, and I tried my very first audiobook as well. I mostly listened to it while I was baking 200 cupcakes for an event. It was better than I anticipated, and I have now bought the HP series narrated by Stephen Fry as I might give the series a reread in 2019 as well. 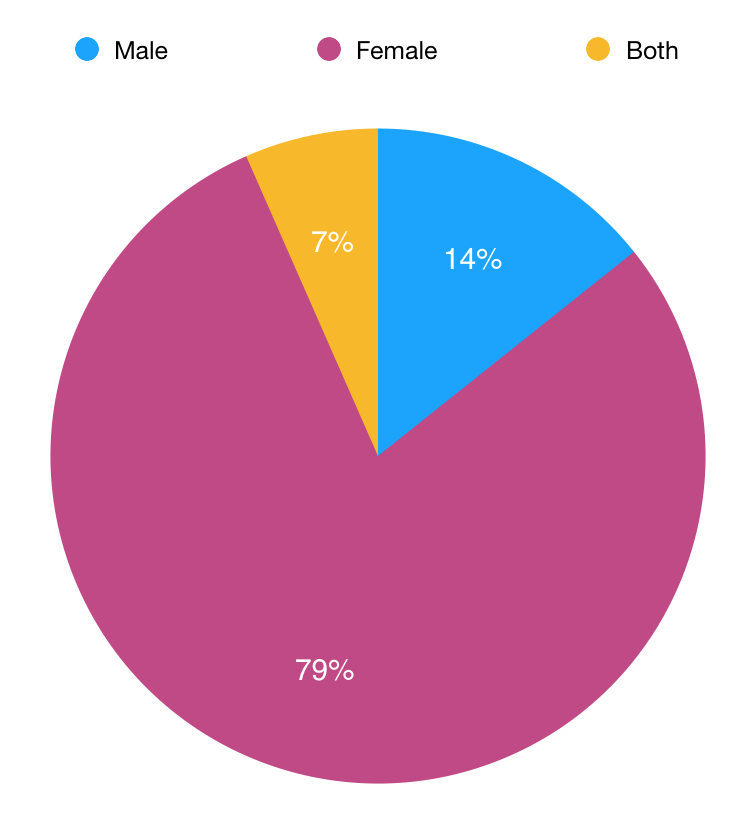 So, this probably isn’t so weird to anyone else, but I always feel like I read more male authors, as that was the majority when I was growing up. My teen years were filled with the likes of David Eddings, Raymond E Feist, Terry Pratchett and so on. I am loving that the tide is turning on this, but is it possible we may have gone too far? Next year I plan on reading more trans and non-binary authors, and maybe adding a few more men in as well. Also, maybe I thought I read more men because I’m constantly talking about Jay Kristoff and Terry Pratchett?? 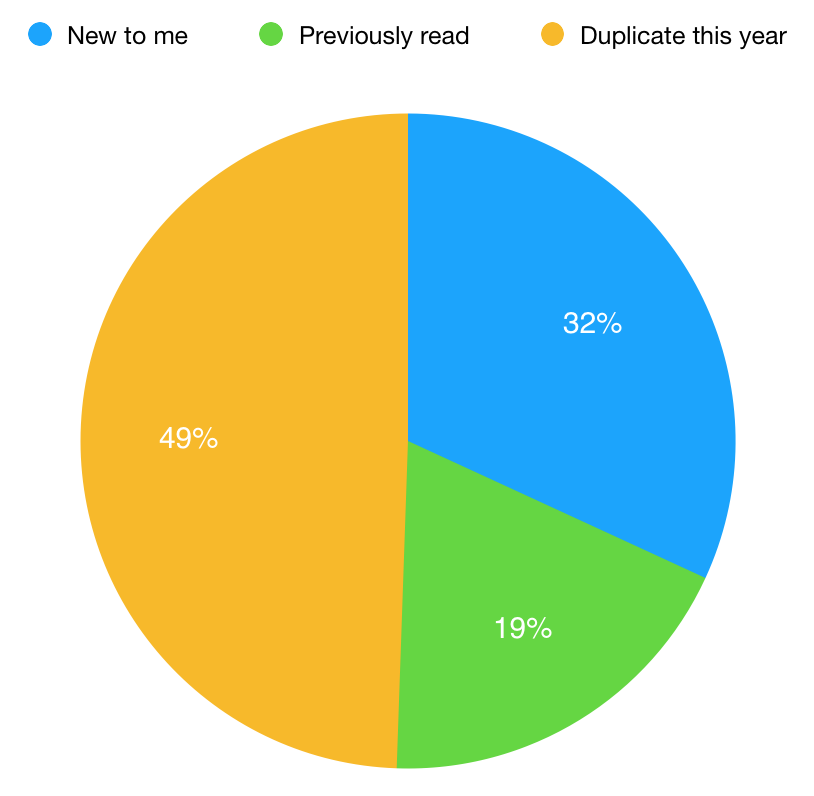 I don’t really know how to describe this one. (I’m pretty tired now…) I guess all I can say is that of the authors I did read this year, nearly a third were new to me. However, Holly Black was a ‘new to me’ author at the start of the year, and then I read 5 of her books (and reread one as well) so she would count for 1 book in ‘new to me’ and 5 books in ‘duplicate this year’. Is this even making sense any more??? 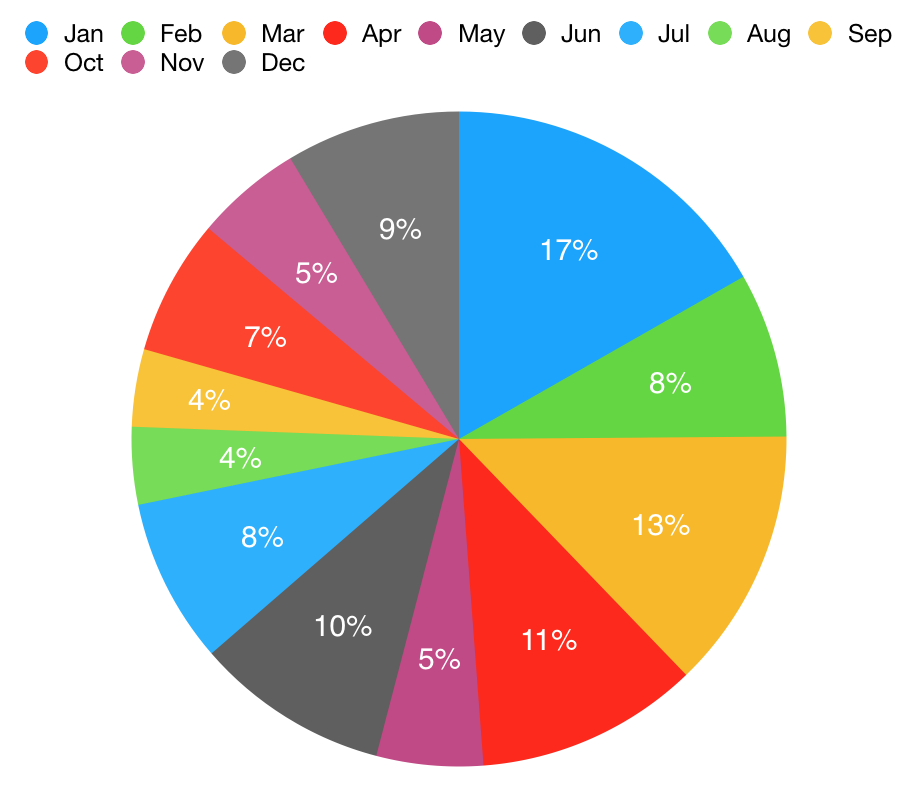 In terms of my very large book hauls for the year, I went back through all my monthly posts and tried to consolidate the numbers into a single pie chart. I can’t guarantee how accurate this is because my format changed a lot (although it was mostly nuancing) over the year and it became harder to count. Anyway, of the books I got, most were in January (but that’s because we got back from a 2.5 month holiday in Jan so technically all my Dec and half my Nov books counted as Jan). In 2019 I’ll be recording this very differently!! 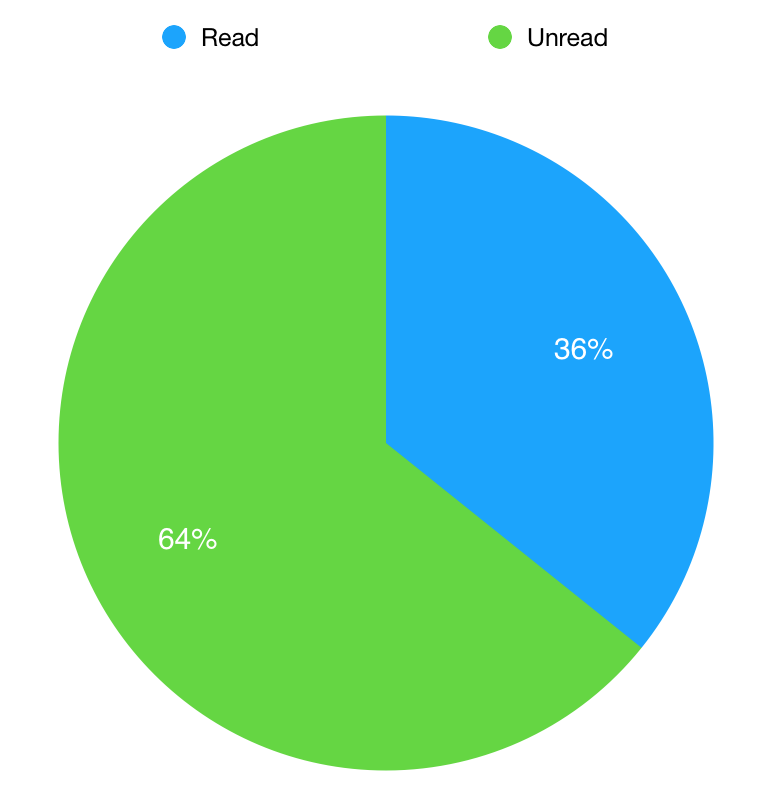 I also went through and (after removing duplicates) counted how many of the books I accumulated throughout 2018 I actually read in 2018. The number wasn’t terrible, but there is definitely (a lot of) room for improvement. Suffice to say that I hope I will be buying less in 2019, and if not, then I hope to read more than I buy!!

OK, so I had this weird thing happen when I went back to write this list. I discovered that when I rate books in the mushy after-glow of reading them, I see less of their faults and tend to rate them fairly high (as evidenced above). However, the books I have been rating 9 or 10 are sometimes less memorable than those I have rated 8. So, with that in mind, my top 10 for 2018 are not always my highest rated books. (I should probably fix that though… right?) Also, I didn’t include re-reads… (Otherwise Carry On would make the list every year.)

I also just want to give three honourable mentions to some other truly amazing books I read this year that were so close to being on this list (and if I wasn’t so enamoured with Holly Black’s entire back catalogue of Faerie stories, probably would have been):

Umm, I don’t know. I’m pretty sure my brain is mush after all that analysis. (I’m on holidays for Pete’s sake! My work brain is turned off!) OK, let’s start with an easy one, like number of books I plan to read this year, and then see if my brain kicks in after that…

So, that’s a wrap on 2018, folks. Again, apologies about the length. If you’re still with me after this VERY lengthy post, then go buy yourself a chocolate or a wine because YOU DESERVE IT. As for me, I’m going to sleep because I’m bloody exhausted!

* These have got to be the vaguest goals ever… WTF Meeghan?! 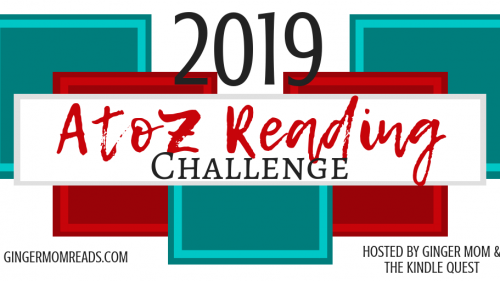