Hello bookworms!! Welcome to Top 5 Tuesday!! This week’s topic is top 5 books that scared me. Which means, we are in the spooky month of October!!

OK, so we know that I don’t actually read horror books, and the thrillers I do read are more crime books than anything else. Although, I do love me a good Janet Evanovich and James Patterson, it’s more about solving the mystery than any actual drama. I could talk about books that scare in terms of being published, but I also don’t want to talk about how much I disliked From Blood and Ash again… (awkward opinions…)

So, today I’m going to twist my own topic slightly, and talk about the scary books I read as a kid. Which probably explains why I don’t like creepy dolls. Please keep in mind that I read these books between the ages of 9 and 12. Also, wow… who let me read these books then?! (I blame my cousin.)

top 5 books that scared me

Look, I read a lot of R. L. Stine as a tween ok? No judgement! It’s not like there were a lot of other options. It was the early-mid 90s and it was this, Baby-Sitter’s Club, Sweet Valley Twins/High/Uni, and the Saddle Club. Plus Nancy Drew, the Hardy Boys and Enid Blyton if you were keen on foraging a bit further back. Emily Rodda and Isobelle Carmody were starting to put books out. But these were a staple in pretty much every library. And, as a 9-12 year old, they were pretty bloody scary. (Pun intended.)

The Night of the Living Dummy — R. L. Stine 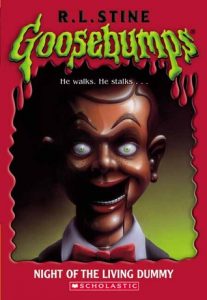 Honestly, I don’t actually remember a lot about this book. Except that it’s the reason that I’ve always disliked ventriloquist dolls. But I’m sure R. L. Stine has a lot to answer for in terms of nightmares for small children. Also, to be clear, I read a lot of the Goosebumps books, including the choose your own adventure ones. But this one is the only one I can still remember.

When twins Lindy and Kris find a ventriloquist’s dummy in a Dumpster, Lindy decides to “rescue” it, and she names it Slappy. But Kris is green with envy. It’s not fair. Why does Lindy get to have all the fun and all the attention? Kris decides to get a dummy of her own. She’ll show Lindy. Then weird things begin to happen. Nasty things. Evil things. It can’t be the dummy causing all the trouble, Can it? 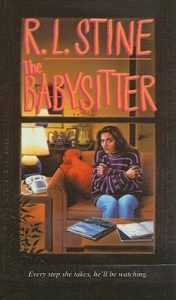 Yes. Not only did I read the first book about a serial killer stalking babysitters, I read the following three books. I also remember one night being home alone reading this (I was about 11 or 12 and my parents went out for dinner), and the phone rang. This was in the years before caller ID and smart phones. And it was just heavy breathing down the line. Don’t get me wrong, it was probably my friends being idiots. But when you’re young and alone on a farm outside town, and you’re reading this shit, it’s enough to creep you out.

From the minute that Jenny accepts the Hagen baby-sitting job, she knows she has made a terrible mistake. First there is the dark and gloomy Hagen house, filling her with dread and horror. Then the crank phone calls start. When she finds a threatening note in her bag, she realizes that this isn’t a harmless game. 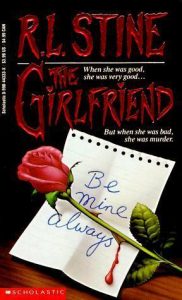 This is where we start going down the path of the psychotic ex-girlfriend who haunts her still alive boyfriend. Because with Stine it was always the girls who were crazy. Except for the Babysitter series where it really was a crazy male stalker. But the “crazy psycho ex” girl got a really bad reputation here. Which really annoyed me, while also managing to creep me out. It’s probably also why I’m no longer scared of vengeful spirits. It’s probably some poor girl who was jilted by a Chad.

Scotty has the perfect life. And the perfect girlfriend. But one weekend while she’s away, Scotty goes just a little…astray.

Suddenly he has a new girlfriend. One who won’t go away. His one wild night has become a nightmare.

Because his new girlfriend has decided that she loves Scotty…to death. 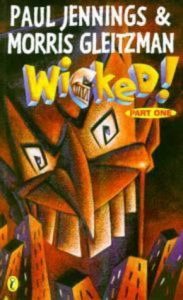 I don’t remember if this miniseries (6 books) was actually scary, or if I was just completely and utterly creeped out by it. And by creeped, I think I mean grossed. Because this story about worms taking over everything was creepy and gross. I don’t even know why I kept reading it. Jennings doesn’t always have happy endings for his books, but maybe I had enough faith in Gleitzman to pull it through. And… I can’t remember the end at all… so… 🤷🏻‍♀️

Dawn and Rory hate each other’s guts. And now they are to be step-sister and brother. Even worse, something very weird is happening to the worms Rory keeps as pets. But what happens when the Slobberers escape during the wedding is only the beginning.

Scary Stories to Tell in the Dark — Alvin Schwarz 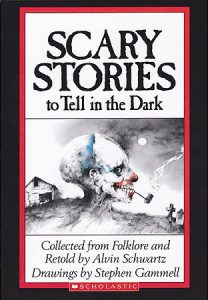 This book was essentially THE book you took to camp or sleepovers to share with friends. Or frenemies. Because it had the creepiest of urban legends and was guaranteed to spook if you were lying in tents in the scrub as a tween. It doesn’t help that so many of the stories in this are urban legend serial killer type stories. And we had Australia’s most notorious serial killer living at the maximum security prison in my city. And the creepy AF forest he buried bodies in just down the highway. It kind of just added to the effect. But yeah, the stories in this book were definitely high on the scary meter when I read this.

This spooky addition to Alvin Schwartz’s popular books on American folklore is filled with tales of eerie horror and dark revenge that will make you jump with fright.

There is a story here for everyone — skeletons with torn and tangled flesh who roam the earth; a ghost who takes revenge on her murderer; and a haunted house where every night a bloody head falls down the chimney.

What are 5 books that scared you?