Hello bookworms!! Welcome to Monday Mini’s, where today we will be looking at the game, Graveyard Keeper — something slightly different for this week!!

Just in case you’ve been wondering where I’ve been (because, I have not been blogging or reading much lately), I have been playing Graveyard Keeper on my Switch pretty much non-stop for the past two weeks. Outside of work that is!!

Also, Happy Valentine’s Day. I figured this was the perfect day to talk about the most macabre, grave-digging alchemist game I have ever played. ❤️ 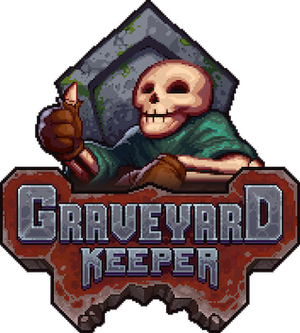 Graveyard Keeper is the most inaccurate medieval cemetery management sim of the year. Build & manage your own graveyard while finding shortcuts to cut costs, expand into entertainment with witch-burning festivals, and scare nearby villagers into attending church. This is a game of capitalism and doing whatever it takes to build a thriving business.

Face ethical dilemmas. Do you really want to spend money on that proper hotdog meat for the festival when you have so many resources lying around?

Make business alliances. These dead bodies don’t need all that blood, do they? Why not sell it to someone who can put it to good use. Same for body parts. Hey, it’s being efficient with recycling!

Explore mysterious dungeons. No medieval game would be complete without these. Take a trip into the unknown and find useful new ingredients which may or may not poison a whole bunch of nearby villagers. Capitalism.

Look, I wouldn’t really classify myself as an adventure game player. I definitely fall on the ‘simulation’ gamer side of the spectrum. I’m all about The Sims (I’ve played every iteration from The Sims through to the current The Sims 4), SimCity, Stardew Valley, and Animal Crossing. I occasionally dabble in action/adventure with the Zelda series, and I finished, and loved, LA Noire and Lego City Undercover. And of course I’ve played Terraria and Minecraft.

But, lately, I’ve been moving out of comfort zone and playing more spooky type games. Not actually scary ones though. I don’t think I’ll ever graduate to Dead by Daylight. I learned my lesson after playing Dead Island intensely for a whole week and then having zombie nightmares. But, I’m climbing back onto the spooky-aesthetic wagon.

Enter, Graveyard Keeper. I bought this a while ago, around the same time I was looking for more games like Stardew Valley. It has farming, mining, cooking, smithing and towns-people interactions that I was looking for, and combat is low-skill (literally one button for sword swinging). But is also has this medieval type layer of witch burning inquisitions, alchemy, and embalming bodies for the graveyard attached to the Church. Where you are also a priest.

In terms of negatives, there is so much going on with this game that it can be a bit daunting to start with. The skill tree that you can buy from provides so many options, but you can’t always use things as soon as you buy them. The side quests don’t give you a lot of detail and if you miss (or forget) the instructions when you get them, they aren’t repeated. Switch controls were a bit clunky for me. I don’t like how you access the inventory/skill tree/quests/map, but that’s because my hands are small. And the tutorial-guide doesn’t tell you much at all — it’s a lot of just guessing, and trial and error.

In terms of positives, I LOVE the game story. It’s a lot of fun, and while I’m about 3/4 of the way into opening up the whole skill tree, I still have a lot to figure out. While the burying, burning or digging up bodies is a bit macabre, it’s not gory at all. I daresay this game will keep me occupied for quite some time. Hopefully not to the detriment of my TBR!! Can confirm I’m living my best necromancer-alchemist life right now.

Have you played Graveyard Keeper?

Cult of the Lamb game