Good morning bookworms!
Is it just me, or is this year going crazy-fast?!

So, I read 7 books in May, which is definitely my smallest monthly count for this year so far. I am still having a crazy fantasy-slump… so I decided to read a lot of enemies-to-lovers contemporary / romance books to combat it!

Top read for the month goes to Sally Thorne’s The Hating Game, hands down, no exception. The beta I read was also magnificent… but that’s really all I can say about it!! Links above for reviews, and I think I’ve only really got a couple more to write!!

Review books to read in June

So, as mentioned last month I won’t be doing set TBRs any more. (I still need to redo my banner!!) However, I will be noting review books that I have to read this month because they are due!

Plus these two left over from May:

In May I did my first ever recommendations post, which I will hopefully be doing a few more of soon. This one was for anyone thinking about making the leap from “YA” to “Adult” fiction. What other topics would you guys like recommendations for?
My discussion post for the month was on why producers shouldn’t change the plot for book to movie/tv adaptations. I did get quite ranty in this one!!
I also started Charvi’s Off Tangent Thoughts posts in May, with ‘while writing book reviews‘ and ‘when someone interrupts my reading‘. They were both really fun to write, and you guys seemed to like them!!

So, there were some pretty amazing posts out there this month. These are some of my faves that I saw:

I also found my April list (YAY) so those posts are getting some love too:


So, I really only have a couple of ‘other’ things for May, because I’ve basically been holed up in my house organising our move or trying to read books while I’m not at work…
Firstly (because Marvel is always first), the new Spider-Man Far From Home trailer is AMAZING!! Take care to NOT watch this if you haven’t seen ENDGAME though, because there are spoilers!! I do love the warning from Tom Holland about that at the start. So cute!! ?
Also, we went and saw an advanced screening of John Wick 3 – Parabellum a couple of weeks ago. And it was fantastic!! (By fantastic, I mean, it was a John Wick film, but a great John Wick film. If you don’t like violence, I don’t recommend it for you.) I actually saw it the same day we watched Game of Thrones episode 5 (which due to time zones we were watching on Mondays). So, I had gone to work, then gone to see John Wick 3, then we came home and watched the battle for King’s Landing. And then I laid awake in bed for several hours thinking about all the violence I had just consumed, and it was so intense. Hubs also couldn’t sleep so we just talked it through and then got up and had tea.
Other life things include that I’ve settled into my new job well. It’s the same job I was doing before, but in a different division, and therefore a new boss. And I love my new boss – she’s amazing, and so different to what I had beforehand. And I’m actually looking forward to working with her more closely once we move back to Canberra! 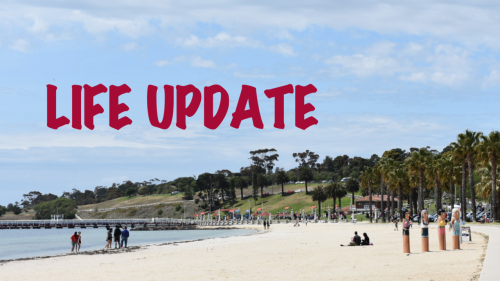