Hello bookworms!! Welcome to Top 5 Tuesday!! This week’s topic is top 5 sequels I would sell my soul for. I mean, I don’t actually want to sell my soul. Soul-selling is completely optional.

Coincidentally I read a dark, gothic fantasy book this week that has a character you could probably sell your soul to… And that’s definitely not for me right now!!

Also, I’m actually doing a top 6 this week, because my bonus entry was never actually published… So, it’s a bonus. 😂

If you missed the July-September topics post, please click here, AND I’ve also posted the topics for October-December if you would like to see those as well. Top 5 Tuesday was created by Shanah @ Bionic Book Worm, and is now being hosted here @ Meeghan reads.

top 5 sequels I would sell my soul for

Yes… The long awaited sequel to Neverwhere by Neil Gaiman. I added The Seven Sisters (it has a name) to my ‘want to read’ list on Goodreads in December 2018. It was due to be published in 2020, and then it was pushed to 2021. HarperCollins website still says it was being published this month. And I am still waiting for it to be released. Gaiman, himself, tagged it on his blog in June 2016, but no mention of it since. In fact, there hasn’t really been much mention of it for a while.

Having recently finished Rule of Wolves, I now need the long hinted at Six of Crows book 3. I added this book to my ‘want to read’ list in September 2018, but I’m actually glad that I have now read all the other books that come before it. Because I read Six of Crows before Shadow and Bone, I didn’t appreciate how much crossover of characters there are until I came back and read it all in the intended order. But yes, I need this one now!! 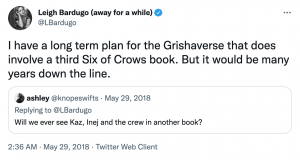 So, about a millionty years ago (or 13, but who’s counting), Maggie Stiefvater write the start of a trilogy of faerie stories. Then a year later, she published the second book. Then we got the name of the third book — and a note saying that it would never happen. Because Maggie didn’t want to finish the series. Which, fair, people changed their minds about stuff all the time… But it doesn’t mean that I want it any less.

If you’ve been here before, you will know that I have a love/hate relationship with Isobelle Carmody. I LOVE every book of hers that I have read. But I HATE how freaking long it takes her to write a series. I will do a shortened rant (hopefully). Obernewtyn was 7 books (8 in the US) and took 28 years. The first book in the Legendsong came out in 1997, book 2 in 2003… and alas, book 3 is STILL coming. *cue crying* I just want to finish Glynn and Ember’s story!!

Have you ever read a book by an indie author, who then didn’t really do very well from a series and so they didn’t continue it? This is me with Leah’s Diana Warren (werewolf) series, and also the spin-off Evangeline O’Dair (necromancer) series. And it pains me, because both books were so good!! I think it was just a case of bad timing (we were over the flooded paranormal market), but these are books that I could have easily read 10 more books of.

Yes, it is unfair of me to post two (kind of three) series of Leah’s, but that’s mostly because I think she deserves a lot of love. A LONG time ago, like in 2017, I beta read a book for Leah called Born of Starlight. And it was AMAZING. Easily one of the best books that I read that year, and still a story that I think about now. Firstly, I need the sequel and however many more books come after that. But also, I need all of YOU to read this book that was never published. Because it was so GOOD. The way the magic system worked was so unique, and the love interest? *SWOON* Honestly, if I was going to sell my soul for any of these books, it would be the sequel to this.

What are 5 sequels you would sell your soul for?

Top 5 books with plants on the cover

Top 5… books you read as an ARC

Top 5… books I read because of #bookstagram