Good morning bookworms!! Happy Tuesday!! Welcome to today’s Top 5 Tuesday!! This month we have a kind of Halloween theme going on, and today’s topic is top 5 books with witches. Or top 5 witches! Whatever floats your boat.

I made this prompt for a tag I created last year for Bookending Autumn, and I just wanted to share it, because I think it’s so cute. ?

Top 5 Tuesday is back!! If you missed the October topics post, please click here, to check what topics we have for the remainder of this month!! Top 5 Tuesday was created by Shanah @ Bionic Book Worm, and is now being hosted here.

If there is only one book that I convince anyone to add to their TBRs, I hope it’s this one. The Price Guide to the Occult is a seriously creepy (fantasy!! Ha, I don’t do horror) read. It’s really atmospheric, and I just really enjoyed it.

Fast-forward one hundred–some years: All Nor Blackburn wants is to live an unremarkable teenage life. She has reason to hope: First, her supernatural powers, if they can be called that, are unexceptional. Second, her love life is nonexistent, which means she might escape the other perverse side effect of the matriarch’s backfiring curse, too. But then a mysterious book comes out, promising to cast any spell for the right price. Nor senses a storm coming and is pretty sure she’ll be smack in the eye of it.

The Witches of Eileanan – Kate Forsyth 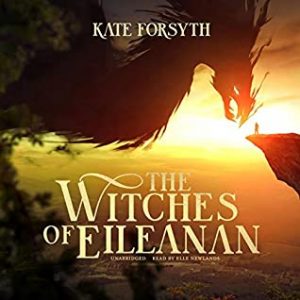 OK, I have 100% screamed about this series before. But I’ve been calling the first book Dragonclaw, because that’s what it’s called in Australia. I have discovered that in the rest of the world, it’s called The Witches of Eileanan. (Which is also what the series is called.) And, it just got made into an audio book and the cover is GORGEOUS.

In the Celtic land of Eileanan, witches and magic have been outlawed, and those caught for practicing witchcraft are put to death! It is a land ruled by an evil Queen, where sea-dwelling Fairgean stir, and children vanish in the night. But in a valley deep in the mountains, young Isabeau grows to womanhood under the guidance of an elderly witch, and must set out on a quest, carrying the last hopes of the persecuted witches.

I don’t think I go down the Maas path too often (have read all the books except Crescent City), so please indulge me this one. Because if I don’t put Manon and the Thirteen on here, then I’m really only lying to myself. If you haven’t read this series, I would recommend it for the witches if nothing else. But you do need to read about 3 books before they turn up…

After serving out a year of hard labor in the salt mines of Endovier for her crimes, 18-year-old assassin Celaena Sardothien is dragged before the Crown Prince. Prince Dorian offers her her freedom on one condition: she must act as his champion in a competition to find a new royal assassin.

Her opponents are men-thieves and assassins and warriors from across the empire, each sponsored by a member of the king’s council. If she beats her opponents in a series of eliminations, she’ll serve the kingdom for four years and then be granted her freedom. Celaena finds her training sessions with the captain of the guard, Westfall, challenging and exhilarating. But she’s bored stiff by court life. Things get a little more interesting when the prince starts to show interest in her … but it’s the gruff Captain Westfall who seems to understand her best.

Then one of the other contestants turns up dead … quickly followed by another. Can Celaena figure out who the killer is before she becomes a victim? As the young assassin investigates, her search leads her to discover a greater destiny than she could possibly have imagined.

I LOVE the way that witches and magic are portrayed in this duology. I love that “witch” covers all magic wielders regardless of gender. And, I love that each witch has her own type of signature (the Rose Witch, the Lavender Witch, the Blood Witch). But most of all, I love the world-building and magic system.

Ahhh… how could I write a post about my favourite books with witches without including my favourite witches of all time?! The witches of the Discworld. To be entirely fair, I love all of them: Magrat Garlick, Nanny Ogg, Agnes Nitt, Annagramma Hawkin. Even the ones we don’t really see that much. But (in my opinion), none of them compare to Granny Weatherwax and Tiffany Aching, who I love equally, but for very different reasons.

Granny Weatherwax is the old, wise, mentor. The strict teacher who won’t put up with your nonsense, but might offer you a biscuit. If you scrubbed the larder, the outhouse and cleaned the goat’s stall. And also if you brought the biscuits with you. She would be considered the head witch, if witches held with that sort of thing. Granny is proud and brave and believes in herself more than she believes in ‘magic’.

Tiffany Aching on the other hand is the youngest of the witches. The new girl, if you will. She is fierce and determined in her own way. She is a brilliant witch, more powerful than many of the others, but she is also young and naïve. Tiffany makes some decisions that aren’t the best, but she does it because she wants to change things for the better. Part of why I love her story is that she challenges the old ways, and has to learn what to accept and fix, and what can be changed for the future.

Look, I try not to do this very often, but there are so many books with witches that I love, it was so hard to stick to a top 5. I am a fantasy reader, after all… And so, you get a couple extra:

Please don’t forget to link to one of my posts (not my home page), and I will link back to all of your posts as soon as I can!! (Because I know it’s Tuesday morning here, but it’s probably still Monday lunchtime elsewhere…)

What are your top 5 books with witches?

Top 5… books that drained my emotions