Hello bookworms!! Happy Tuesday!! This coming Thursday is International Day of People with Disability (aka IDPwD). And to celebrate, today’s Top 5 Tuesday is top 5 books with disability.

One of the reasons that I wanted to go self-hosted earlier this year is to get the accessibility widget. There is so much content in the world that is inaccessible for people who are blind or have visual disability. If you are interested, I highly recommend this TED talk by one of my colleagues, Maryanne Diamond. Maryanne talks about the Marrakesh Miracle, an international treaty that aims to provide people with a print disability (people who can’t read printed materials) access to books. 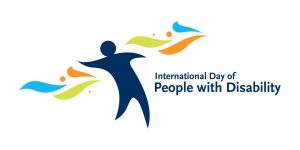 If you don’t know anything about IDPwD, then I also recommend that you go check out their website and twitter account. Although it is a UN sanctioned event, I believe that the main administration for it is in Australia. But there are events happening worldwide on Thursday.

If you missed the December topics post, please click here!! Top 5 Tuesday was created by Shanah @ Bionic Book Worm, and is now being hosted here.

If you haven’t seen or heard me wax lyrical about this amazing graphic novel, then I highly recommend getting your hands on a copy. One of the main characters in Mooncakes has hearing aids, although from memory I don’t think it’s disclosed if they are deaf or have a hearing impairment.

Nova Huang knows more about magic than your average teen witch. She works at her grandmothers’ bookshop, where she helps them loan out spell books and investigate any supernatural occurrences in their New England town.

One fateful night, she follows reports of a white wolf into the woods, and she comes across the unexpected: her childhood crush, Tam Lang, battling a horse demon in the woods. As a werewolf, Tam has been wandering from place to place for years, unable to call any town home.

Pursued by dark forces eager to claim the magic of wolves and out of options, Tam turns to Nova for help. Their latent feelings are rekindled against the backdrop of witchcraft, untested magic, occult rituals, and family ties both new and old in this enchanting tale of self-discovery.

On one hand, this story is a fun and action filled romp through Europe with a character running from responsibilities. On the other hand, it’s an eye-opening look at how people with disability were treated in the 1800’s. Percy, Monty’s best friend, has epilepsy and is being sent away by his guardians to live in an institution. This story is partly his last hurrah before then. I, for one, am very glad this has changed.

Henry “Monty” Montague was born and bred to be a gentleman, but he was never one to be tamed. The finest boarding schools in England and the constant disapproval of his father haven’t been able to curb any of his roguish passions—not for gambling halls, late nights spent with a bottle of spirits, or waking up in the arms of women or men.

But as Monty embarks on his Grand Tour of Europe, his quest for a life filled with pleasure and vice is in danger of coming to an end. Not only does his father expect him to take over the family’s estate upon his return, but Monty is also nursing an impossible crush on his best friend and traveling companion, Percy.

Still it isn’t in Monty’s nature to give up. Even with his younger sister, Felicity, in tow, he vows to make this yearlong escapade one last hedonistic hurrah and flirt with Percy from Paris to Rome. But when one of Monty’s reckless decisions turns their trip abroad into a harrowing manhunt that spans across Europe, it calls into question everything he knows, including his relationship with the boy he adores.

Meet Harper. She’s badass, sarcastic, witty, heroic to the point of silly, and trying not to be defined by her disability. Harper has cerebral palsy, a condition she has had since birth. And she’s not about to let it get the better of her now she’s been accidentally transported to another world. Although I’ve been told this is good representation, Harper has mild symptoms, so this isn’t the be all, end all of CP.

Fall in love, break the curse. Cursed by a powerful enchantress to repeat the autumn of his eighteenth year, Prince Rhen, the heir of Emberfall, thought he could be saved easily if a girl fell for him. But that was before he turned into a vicious beast hell-bent on destruction. Before he destroyed his castle, his family, and every last shred of hope.

Nothing has ever been easy for Harper. With her father long gone, her mother dying, and her brother constantly underestimating her because of her cerebral palsy, Harper learned to be tough enough to survive. When she tries to save a stranger on the streets of Washington, DC, she’s pulled into a magical world.

Break the curse, save the kingdom. Harper doesn’t know where she is or what to believe. A prince? A curse? A monster? As she spends time with Rhen in this enchanted land, she begins to understand what’s at stake. And as Rhen realizes Harper is not just another girl to charm, his hope comes flooding back. But powerful forces are standing against Emberfall . . . and it will take more than a broken curse to save Harper, Rhen, and his people from utter ruin.

Little Pauchok, the spider herself is our character with disability here. While the book doesn’t give a lot of details, it does say that Ella is in a wheelchair and has a breathing apparatus. We know that she has muscular dystrophy resulting from lysergia plague, but my guess is that’s made up. Lysergia is a song by Velvet Acid Christ, and we all know that Kristoff like his music easter eggs in books. I don’t know if this is good representation, but Ella struggles when she is without the chair and air, so at least it’s consistent.

Moving to a space station at the edge of the galaxy was always going to be the death of Hanna’s social life. Nobody said it might actually get her killed.

The sci-fi saga that began with the breakout bestseller Illuminae continues on board the Jump Station Heimdall, where two new characters will confront the next wave of the BeiTech assault.

Hanna is the station captain’s pampered daughter; Nik the reluctant member of a notorious crime family. But while the pair are struggling with the realities of life aboard the galaxy’s most boring space station, little do they know that Kady Grant and the Hypatia are headed right toward Heimdall, carrying news of the Kerenza invasion.

When an elite BeiTech strike team invades the station, Hanna and Nik are thrown together to defend their home. But alien predators are picking off the station residents one by one. And a malfunction in the station’s wormhole means the space-time continuum might be ripped in two before dinner. Soon Hanna and Nik aren’t just fighting for their own survival; the fate of everyone on the Hypatia—and possibly the known universe—is in their hands.

But relax. They’ve totally got this. They hope.

Of course not everyone has visible disabilities. The 2020 theme for IDPwD is “not all disabilities are visible”. So I thought I would slide one in here for reference. This book is not only amazing representation, it’s own voices as C.G. has autism. Avery Lou has autism, and his brother Sammy wants to look after him. Sammy just doesn’t know the best way to do it. Both brothers have anxiety and have been let down by their family as well.

Sam is only fifteen but he and his autistic older brother, Avery, have been abandoned by every relative he’s ever known. Now Sam’s trying to build a new life for them. He survives by breaking into empty houses when their owners are away, until one day he’s caught out when a family returns home. To his amazement this large, chaotic family takes him under their wing – each teenager assuming Sam is a friend of another sibling. Sam finds himself inextricably caught up in their life, and falling for the beautiful Moxie.

But Sam has a secret, and his past is about to catch up with him.

Honestly, I could have made this week’s Top 5 a Top 10 books with disability so easily. But instead of my waffling on about more, C.G. Drews wrote a post not that long ago with 10 recommendations of characters with disability.

Please don’t forget to link to one of my posts (not my home page), and I will link back to all of your posts as soon as I can!! (Because I know it’s Tuesday here, but it’s probably still Monday elsewhere…)

What are your top 5 books with disability?

Top 5 sequels I would sell my soul for