Hello bookworms!! Welcome to Top 5 Tuesday!! This week’s topic is top 5 books on my wishlist.

Yes friends, it is BIRTHDAY WEEK!! Much excitement, etc. Except for one thing. Husband advised me that he hasn’t gotten me anything yet because I haven’t been dropping hints like I usually do. Which is very unlike me at all. So, keep your fingers crossed that he might find some inspiration below!!

Also, every year I plan to spoil others as I’m very fortunate in my circumstances. So if you see this, please feel free to drop YOUR wishlists in the comments and I’ll see what I can do. Depending on how many we get, I may need to resort to a RNG to help me!!

top 5 books on my wishlist 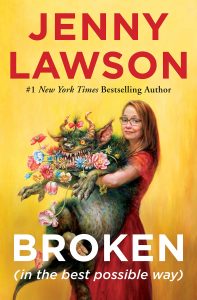 Jenny Lawson is amazing, and I’ve been a massive fan since she bought a giant metal chicken and tried to pass it off as an anniversary gift. Let’s Pretend This Never Happened, her debut novel, is still one of my most fave memoirs.

As Jenny Lawson’s hundreds of thousands of fans know, she suffers from depression. In Broken, Jenny brings readers along on her mental and physical health journey, offering heartbreaking and hilarious anecdotes along the way.

With people experiencing anxiety and depression now more than ever, Jenny humanizes what we all face in an all-too-real way, reassuring us that we’re not alone and making us laugh while doing it. From the business ideas that she wants to pitch to Shark Tank to the reason why Jenny can never go back to the post office, Broken leaves nothing to the imagination in the most satisfying way. And of course, Jenny’s long-suffering husband Victor―the Ricky to Jenny’s Lucille Ball―is present throughout.

A treat for Jenny Lawson’s already existing fans, and destined to convert new ones, Broken is a beacon of hope and a wellspring of laughter when we all need it most.

You Deserve Each Other – Sarah Hogle 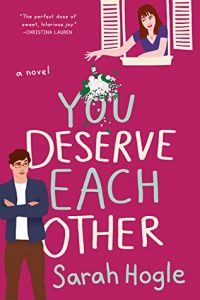 This one has been on my wishlist for about a year now. I was waiting for it to come out at my local bookstore. But one of the problems with Australia is that we often don’t get a lot of physical adult contemporary romance books. So it’s either order online or buy an ebook… *sigh*

When your nemesis also happens to be your fiancé, happily ever after becomes a lot more complicated in this wickedly funny, lovers-to-enemies-to-lovers romantic comedy debut.

Naomi Westfield has the perfect fiancé: Nicholas Rose holds doors open for her, remembers her restaurant orders, and comes from the kind of upstanding society family any bride would love to be a part of. They never fight. They’re preparing for their lavish wedding that’s three months away. And she is miserably and utterly sick of him.

Naomi wants out, but there’s a catch: whoever ends the engagement will have to foot the nonrefundable wedding bill. When Naomi discovers that Nicholas, too, has been feigning contentment, the two of them go head-to-head in a battle of pranks, sabotage, and all-out emotional warfare.

But with the countdown looming to the wedding that may or may not come to pass, Naomi finds her resolve slipping. Because now that they have nothing to lose, they’re finally being themselves–and having fun with the last person they expect: each other.

What’s Not to Love – Emily Wibberley and Austin Siegemund-Broka 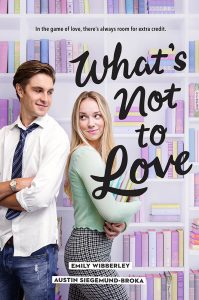 I really loved Always Never Yours by this writing duo. And while I have the others, I still need to read them… But that doesn’t stop me wanting a copy of this now!! Maybe I can do a bulk read of the three unread ones when I finally get this!! But I do need to get the hardcover to match the others. ?

Since high school began, Alison Sanger and Ethan Molloy have competed on almost everything. AP classes, the school paper, community service, it never ends. If Alison could avoid Ethan until graduation, she would. Except, naturally, for two over-achieving seniors with their sights on valedictorian and Harvard, they share all the same classes and extracurriculars.

So when their school’s principal assigns them the task of co-planning a previous class’s ten-year reunion, with the promise of a recommendation for Harvard if they do, Ethan and Alison are willing to endure one more activity together if it means beating the other out of the lead.

But with all this extra time spent in each other’s company, their rivalry begins to feel closer to friendship. And as tension between them builds, Alison fights the growing realization that the only thing she wants more than winning… is Ethan. 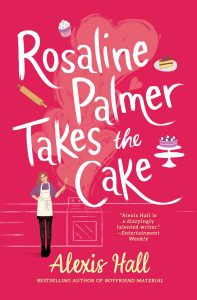 I absolutely adored Boyfriend Material when I read it last year, and I hope this one is just as good!! Alexis Hall is definitely making a name for themselves with queer fiction, and I need to try some of their others too.

Following the recipe is the key to a successful bake. Rosaline Palmer has always lived by those rules—well, except for when she dropped out of college to raise her daughter, Amelie. Now, with a paycheck as useful as greaseproof paper and a house crumbling faster than biscuits in tea, she’s teetering on the edge of financial disaster. But where there’s a whisk there’s a way… and Rosaline has just landed a spot on the nation’s most beloved baking show.

Winning the prize money would give her daughter the life she deserves—and Rosaline is determined to stick to the instructions. However, more than collapsing trifles stand between Rosaline and sweet, sweet victory. Suave, well-educated, and parent-approved Alain Pope knows all the right moves to sweep her off her feet, but it’s shy electrician Harry Dobson who makes Rosaline question her long-held beliefs—about herself, her family, and her desires.

Rosaline fears falling for Harry is a guaranteed recipe for disaster. Yet as the competition—and the ovens—heat up, Rosaline starts to realize the most delicious bakes come from the heart. 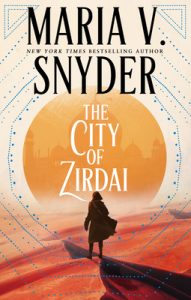 I had requested a review copy of The City of Zirdai last year, but the publishing date was pushed back. Then there was a miscommunication and I didn’t get a copy this year. So now I need to wait until it’s in my local bookstore so that I can continue this amazing dystopian series!!

Through her courage and tenacity, Shyla Sun-Kissed has awoken the power of The Eyes of Tamburah. But this feat only marks the beginning of the challenges that the magical order, the Invisible Sword, faces to free the underground city of Zirdai.

Though they have allies among the monks and splinter cells inside the city, Shyla knows the Invisible Sword doesn’t have the strength to win. With the group fracturing due to the strain of losses from their latest ordeal, thinly veiled suspicions and endless disagreements, it’s up to Shyla to forge a new united order.

When both the draconian Water Prince and brutal Heliacal Priestess learn of Shyla’s new powers, life becomes even more complicated as they will stop at nothing to capture Shyla and take the magic of The Eyes for themselves. Hunted at every turn and unable to hide, Shyla and the Invisible Sword must use every resource at their command – and unearth new ones – in their race to save the city from destruction. But their enemies always seem to be one step ahead. And the cost to win the battle may be more than Shyla would ever be willing to pay…

Review for book 1: The Eyes of Tamburah

What are 5 books on your wishlist?