We finally finished watching the Netflix adaptation of Shadow and Bone on the weekend, and I loved it!! Seriously, I didn’t even mind the things that they changed – it only added to the story. Besides, don’t we all need the next Bridgerton or The Witcher in our lives?!

So, with that in mind, today’s post is all about some stories that I think would make amazing TV series!! TV series are able to add more depth and detail to characters, motivations and world building than movies are, which only adds to the story as far as I’m concerned. I will  be leaving off all the ones that are already being adapted!! This is my wishlist, but hey, Netflix, let me know if you need someone to help you choose what to adapt and how!! ?

If you missed the May topics post, please click here!! Top 5 Tuesday was created by Shanah @ Bionic Book Worm, and is now being hosted here @ Meeghan reads.

So, uh, I’m planning to forget that there was ever a movie adaptation made for Vampire Academy. Why? It was tragic… BUT, a TV series could explore not just this series, but also the Bloodlines story which would give it a bigger scope. PLUS then we get the backstory of the main series, and we get Sydrian as well!! I’m all about the silver linings with this, ok?!

Seriously, they could spend so much time exploring the vampire Court and backstory of the main families. Plus those with elemental magic, and Spirit magic. There’s the war with the Strigoi and the Alchemists!! They could even give us an actual backstory for Abe… ?

Not to mention, they could possibly do the relationships between the main VA characters much better in a longer time setting – particularly with that, umm, *cough* age gap remaining quite so ‘left unsaid’…

I know the Legendsong trilogy is still unfinished, but it’s still an amazing two books to date. And, you know, I still have hope that one day it will be completed. Carmody was the original George R. R. Martin after all!! ? (Yes, this is me whining yet again that it took her 28 years to release 7 books in The Obernewtyn Chronicles.)

The Legendsong would make a great TV series because you could flip between the two main POVs really easily. On one hand there is Ember, a twin who is lost at sea, sucked into a parallel universe and who has no memory of her former life. On the other hand you have Glynn, her sister, who follows Ember, but is separated from her. Neither sister knows that the other is in this new world, but Glynn is desperate to get back and find Ember.

As well as this overarching plot, there are countries on the brink of war, prophecies of a chosen one, and unrequited love interests. *swoon* Plus the book flits back through some of Glynn’s memories of the past, and this could be done really well in a visual sense.

YES!! Could The Chronicles of Ixia be the new Game of Thrones?! It’s totally possible.

You’ve got two countries on the verge of war, and a ban on magic in one country. A prisoner turned poison taster for the King, trained to become an assassin by the King’s right hand. Forbidden love, a comedic duo BFF couple, a lost child torn from their family. As if this wouldn’t make compelling viewing!!

In fact, once you mix in all the side stories from the Glass trilogy and the short stories. Plus the new characters introduced when Yelena crosses the border – gasp!! So good!!

While there are a wealth of amazing characters introduced in Poison Study, I really need that Ari and Janco banter magic recreated. The world needs more friendships in tv series. It can’t just be Jaskier and Geralt holding things together. Alone. With song.

And it’s not like there’s a shortage of villains either. Plus characters with massive redemption arcs. The potential for a new Zuko if it’s done well is enthralling to say the least!!

As one of my all-time fave series, I would absolutely adore seeing The Old Kingdom series adapted for TV. Of course, this could be a challenge as certain books in the series focus on different generations. However, it could be done – it’s done in shows like The Crown where there are large chunks of time between seasons.

Alternatively, the main show could focus on the books Lirael, Abhorsen and Goldenhand, and the short stories Across the Wall and To Hold the Bridge. We could then do a lot of flashbacks to cover the pertinent parts of Sabriel and Clariel as needed for story. There are flashbacks or memories described in Lirael anyway, so it wouldn’t be wholly uncommon.

Mostly I just want to see Mogget brought to life. But can you imagine how awesome the necromancy element of crossing the river with the bells could be?! Bring all on the amazing sounds that could create!! 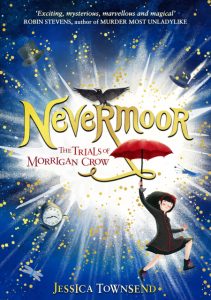 OK, hear me out: Nevermoor, ANIMATED!! Because honestly, I think this is my most brilliant idea ever.

Oh my gosh, the more I talk about this, the more I want it to happen!! Like, deep in my bones and heart I know this would be utterly amazing. Especially with how gorgeous animations are these days. It could be so perfect – on par with ATLA or The Dragon Prince. Seriously, how do we champion this happening??

What are your top 5 books you wish had TV adaptations?