To Kill A Kingdom blurb:

Princess Lira is siren royalty and the most lethal if them all. With the hearts of seventeen princes in her collection, she is revered across the sea. Until a twist of fate forces her to kill one of her own. To punish her daughter, the Sea Queen transforms Lira into the one thing sirens loathe most – a human. Robbed of her song, Lira has until the winter solstice to deliver Prince Elian’s heart to the Sea Queen or remain a human forever.

The ocean is the only place Prince Elian calls home, even though he is heir to the most powerful kingdom in the world. Hunting sirens is more than an unsavory hobby – it’s his calling. When he rescues a drowning woman in the ocean, she’s more than what she appears. She promises to help him find the key to destroying all of siren-kind for good. But can he trust her? And just how many deals will Elian have to broker to eliminate humankind’s greatest enemy?

Let me start by saying that if you are after a literary masterpiece, this is not the book you are looking for. At its heart this is absolutely a moderately dark, yet still fun, Disney-like twisted fairytale retelling. But gosh, was it a good one!

The story follows Princess Lira, the evil siren who kills princes – not for fun, mind you (although she does have fun doing it), but because of the mythology of the siren goddess. Each heart you take gives you power, and so you must take one for each year you are alive. One for each birthday in fact. You see, they’re not actually the bloodthirsty beasts that they’re made out to be. They HAVE to kill humans. You should really feel sorry for them.

Yes, I am joking.

Kind of. That is how this story actually starts.

So the main characters for this are Lira, our killer siren princess; Elian, the prince made of gold; and the Sea Queen, Lira’s mum and our BIG BAD.

Let’s start with Lira. She’s described as Ariel from the Little Mermaid (except with more bloodlust and she keeps her voice), but she has one gold eye and one blue eye. I can’t remember if her tail is gold or blue (it matches one of her eyes) because I read this book in August 2018 and WHY WOULD YOU TAKE NOTES, PAST MEEGHAN? Remembering things six months later is soooo much easier. *He hem* Apologies, back to Lira. She was nice. I mean, not really. She’s kind of evil and violent and so hell bent on revenge that she has a hard time seeing things that are 6 inches in front of her face. But I like morally grey characters who have a sliver of good in them, so … *shrug*. I also like how she looks out for her cousin Kahlia. That’s actually nice (and the sliver of good that I was talking about).

Elian (Eric, hahaha) was … also nice? Kind of pompous. But also he was realistic in knowing where his skills lie. It just so happened that it was also where his interests lie… surprise! He can come across as a bit of a self-indulgent wanker, but in a “this-is-my-charm,-also-I-might-surprise-you-by-the-end” way. I liked the way he treated his crew, and his sadness about the prince at the start. He is also a vicious murder-beast, so he and Lira have that in common! (Naww, mutual hobbies!!!) Except, he likes to kill mermaids and sirens (there is a difference – apparently), so maybe not something they could do together… I did like the reference to King Midas in OUR mythology (you know, the guy who turned everything he touched to gold), that was cute.

And, then there was one. The Sea Queen is basically Ursula, except possibly meaner, and with two gold eyes and probably less blue eyeshadow. Also Lira’s mother, she does some pretty despicable things that you will have to read about because I do not do spoilers. Unless you ask nicely. Or I do that thing where I hide them. Anyway, she’s mean and we don’t like her (that’s definitely NOT a spoiler). Also, she does not love anyone or anything (except maybe power) and that is shown in the way she has raised her daughter.

The world building / magic system was pretty easy to follow. I think. From memory. (Why don’t I write notes??) It is explained that the mother of the siren usually hunts for their daughter’s hearts for the child’s first 12 or so years, and then the sirens are released to hunt their own hearts. There are rules about things that make sense, i.e. don’t kill your own kind. The deal with Lira becoming human is also explained well. The book is well written, like REALLY well written. Great language, nothing confusing. The dialogue was good banter, but not hugely meaningful.

However, if you’re not a fan of slow-burn romances or enemies to lovers tropes (TWO OF MY FAVE THINGS EVER), then this book might not be for you. If you like badass / morally grey characters / crap-tonnes of violence and blood, then maybe this book IS for you. But only you can make this decision.

For the record, I really enjoyed it (hence the 4 stars above). It’s not a must-read, and it didn’t make my top 10 of 2018, BUUUUT, I do love me a fairytale retelling, and I’ll love it even more if there’s stabbing and it makes me cry (this didn’t do the latter, but it had the former in spades). 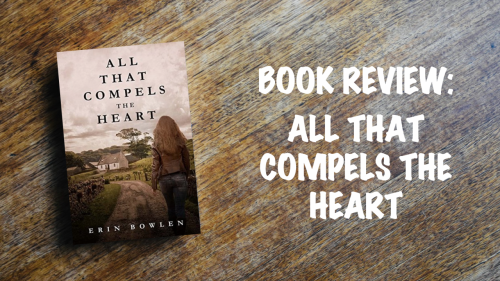 All That Compels the Heart – Erin Bowlen