Did I completely forget that July is over and I haven’t done a wrap up yet? Yes, I did. Along with not doing all the other things I meant to do in July… (like that challenge update… which is still coming…)

July… was a month. I do feel a bit like the whole world is going to shit right now. That’s pretty much all I have right now… so let’s just get stuck in.

I read a fair chunk in July. I was pretty close to filling in the entire board for the Pop Culture readathon (image and checklist below), although I did fill a lot with graphic novels… (they still count, Fletcher!!)

But by far the weirdest part of July was going back to this list and seeing that I started the month with Meet Cute Club and ended it with Meet Cute… which are, weirdly, different books.

I’m having difficulty picking my favourite book of the month, so I’m taking the easy way out and giving you BOTH of the candidates:

Final look at the prompts ticked off for the readathon is below. Just quietly, I’m pretty proud of myself for hitting so many prompts!! The final tally was 14 out of 16, and all the ones below with stars are the ones I completed. 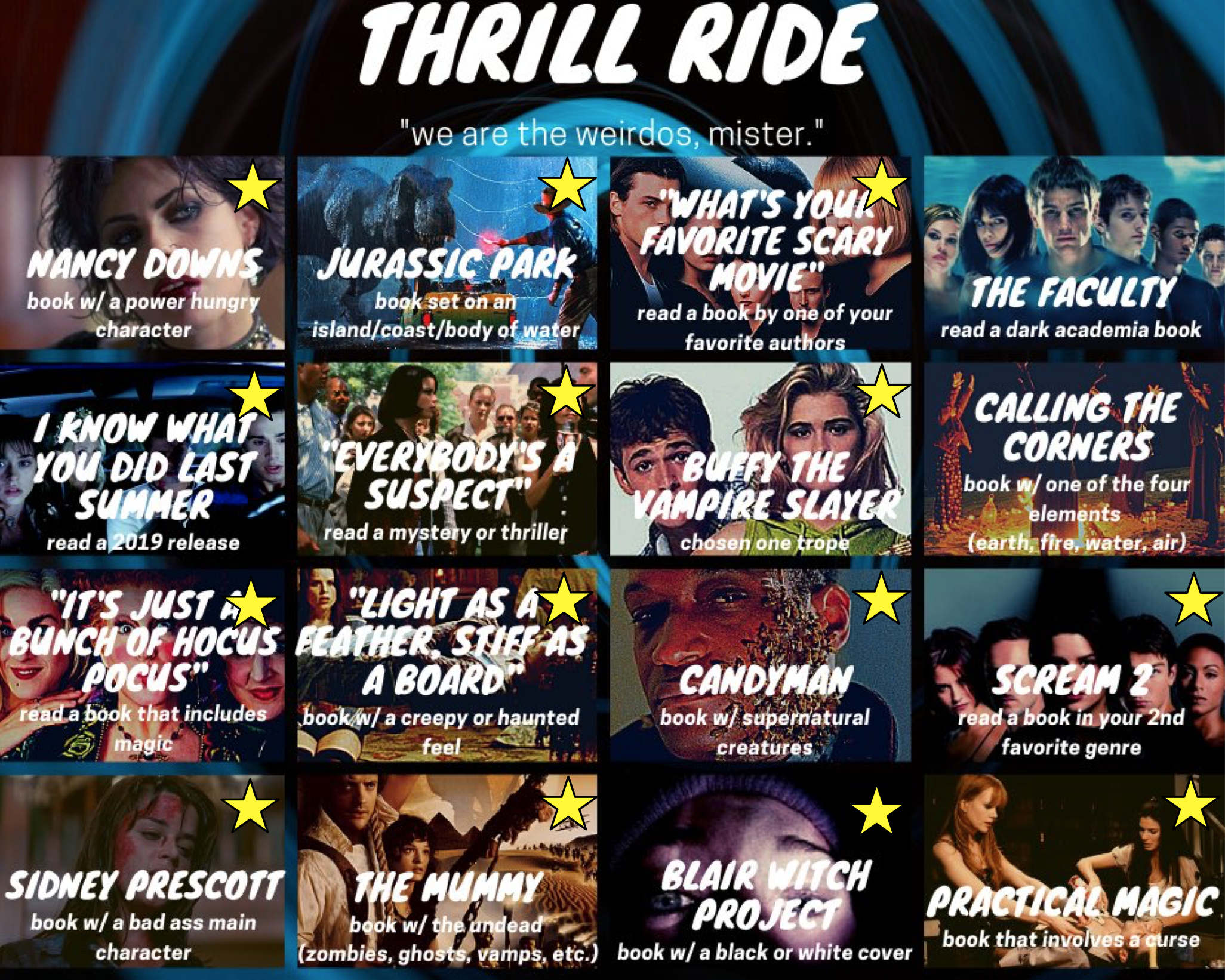 I took a week off work in July to paint and do some more things in the apartment. This… did not go as planned… I painted about a third of my room, and then all hell broke loose and both husband and I ended up having medical appointments (unrelated to each other, and also unrelated to COVID) and then I spent the last weekend of my ‘break’ lying on the couch feeling sorry for myself and watching a lot of tv shows.

I started July playing lots more of The Sims 4: Eco Lifestyle which was the new pack that came out in June. I’m really enjoying it, and I’ve been splitting some of my bigger families into smaller households so I can concentrate on playing more of the actual content as opposed to it just being a small part in the overall game.

Towards the end of July I re-caught the Animal Crossing bug (specifically after the diving update) and I have definitely been playing more of this recently. There are fireworks every Sunday night in August in case anyone doesn’t know!!

We are BAAAAACK, baby!! Yes, the team has started Season 2 of out Ebberon campaign, and I am loving it. I have definitely been flexing more of my “don’t you know who I am?!” Princess Iseult of the Eldeen Reaches, snobby and snooty b!tch muscles, and we’ve had some good wins. Combat has been slow so far in this campaign, but that’s on us as we’re trying to do more storyline and subterfuge, which has been a lot of fun!!

I said I would let you all know if we do decide to stream the games, and we are!! There’s a bit of backstory from season 1, but if anyone is interested, I’m happy to give an overview in next month’s wrap up?! We stream through Trent’s twitch account (https://www.twitch.tv/trentbroggy) on Saturday nights at 7:00pm AEST (which is around Saturday morning in Europe, or just very early/may not have gone to bed yet from Friday in the US).

Things I watched in July were (pretty much all of this was on Netflix):

I’m not even sure what I listened to for the first 3 weeks of the month, but I DEFINITELY listened to folklore on repeat for the last 7 days.

In June I wrote about how I ended up doing my own Top 5 Tuesday posts while Shanah was on hiatus, and I wrote this line:

Of course, if you know me at all, you’ll know that I didn’t stop at 5 for them… there’s no one to police me any more so I can do what I like!! MWAH-HAHAHAHAHAHAHAHAHA… ok, I’ll lower the evil now!!

… this is funny to me because in July Shanah reached out and asked if I would like to take over Top 5 Tuesday as the host. (Spoiler: I said yes.) Which means… I now have to police myself?!! I’ve just realised that this is not going to end well at all!!

This is also such a huge thing for me (hosting, not policing myself), because I have been participating in T5T for over two years (6 March 2018 was my very first post!) and I’ve always felt like my weekly Tuesday post is an anchor for my posting as it’s so rare that I skip a topic. Anyway, I’ve yelled a lot about how much I appreciate Shanah’s trust in me to take on her baby – and I am truly honoured and grateful. So… I hope you join us!!

I’m about a week behind on blog hopping at the moment because I’ve been sitting on my couch doing NOTHING, but I have read all of your July posts! Plus I found a list of June posts that I meant to include in last month’s wrap up… and I’m not sure why I didn’t?!! Regardless, these are some of your recent posts that I enjoyed:

Finally, Cait @ Paperfury just writes the most amazing posts, and I love them all… I actually had FIVE on my list, so instead of pretending there aren’t that many and slipping them in between the others *cough*, I’m going to own up to this and put them all together: