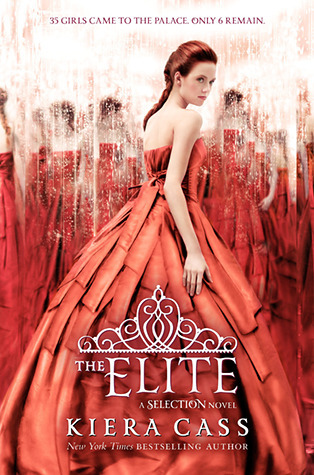 The Selection began with thirty-five girls.

Now with the group narrowed down to the six Elite, the competition to win Prince Maxon’s heart is fiercer than ever—and America is still struggling to decide where her heart truly lies. Is it with Maxon, who could make her life a fairy tale? Or with her first love, Aspen?

America is desperate for more time. But the rest of the Elite know exactly what they want—and America’s chance to choose is about to slip away.

Gosh, this book was really good! So close to being a 9 star read that I just couldn’t even, but I decided not to in the end… but it was so close!

The game itself definitely gets a hit more real and hits a bit closer to home for America, but it gets really interesting too. The number drops by one in a fairly significant way *gasp, cry*, but we’re down to four by the end of this book!

Again, I wasn’t a huge fan of Aspen (jerk!), but Maxon did some pretty jerky things too, so at this stage there’s points for both sides. (But let’s be honest, Maxon is still f***ing miles ahead here.)

What I really liked about this one was I felt like you got to see a realness to the maids – Anne, Mary and Lucy. They’re just so sweet, but they each have their own personality. I just really like them!

I also think America is onto something with her idea of what the rebels are after – to be honest that’s what I thought it was during the first book, but who knows? Cass certainly isn’t leaving very many clues behind.

All in all, I really enjoyed this one, and I’m about to read The Guard, and then get stuck into The One straight after!

Side note: The Guard was a waste of space on my iPad. Totally not worth it. Aspen is still a jerk (although I could have swapped jerk for a harsher word by now).

3 thoughts on “The Elite – Kiera Cass”